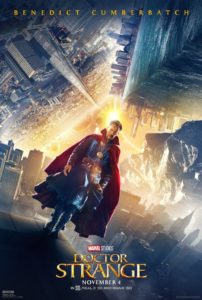 My oldest daughter came home from college for the weekend, and insisted that I not see Doctor Strange without her. I talked to the rest of the kids about it, and one by one they each decided they wanted to see it too.

I was $75 down before arriving at the theater, and then we bought snacks². I tweeted my forlorn hope that I was somehow going to have $110 worth of fun in the next two hours.

When the film ended, we all had smiles on our faces. We talked Marvel Cinematic Universe stuff until late, and the kids’ opinion was that this was the best Marvel movie³ to date.

My own opinion is that it’s not the best, but it’s certainly quite good. We got to see Benedict Cumberbatch play someone who grows into a sense of personal responsibility, and by the end we got to see a Marvel superhero who not only warps reality, he also chews scenery.

¹The 3D turns out to have been worth it. I’ll be seeing it again in IMAX 3D just for that experience. But I’m waiting for $5.00 movie day, because ouch that first showing was ‘spensive.

²Theaters generally do not get a cut of ticket sales for the first two weeks it’s out, and sometimes it’s even longer. They depend on concessions to keep the doors open. I always buy concessions because that money (for the local cinema chain) stays in town and creates jobs.

³They have seen all of them except the Edward Norton/Tim Roth Hulk movie. We are now collecting the Blu-Rays, and we’re two Caps, two Thors, and a Hulk away from having all of them. Oh, and the first Avengers film. We have that on DVD, so Sandra says it can wait.