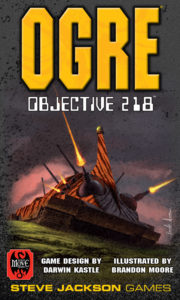 I picked up Ogre: Objective 218 at GenCon Indy without having played it, or having seen it played. All I got was the sales pitch from a friend of mine who worked at their booth, and his pitch amounted to “fast-playing card game for two players. Build a supply line to the enemy base and capture it.”

Today I sat down with my 13yo son and played it. He had already consumed the instruction manual, and he taught me to play it in a single round, which lasted about ten minutes.  Over the next half hour we played two more rounds, and at the end of the game session he’d beaten me two to one. It would have been two to zero, but I insisted upon a final game, which I think he may have thrown, because he got both his Ogres out early (read: “as close to simultaneously as the rules allow”) but didn’t press his advantage with cruise missiles.

If you want a tutorial, Steve Jackson and friends have provided one!

I didn’t think Steve Jackson Games could deliver something satisfying that played faster than Zombie Dice¹, but with the help of It’s Your Move Games² they totally did. Ogre: Objective 218 is fun for casual players, and is also good for folks who count cards and adapt their tactics in accordance with shifting statistical models.

It lists at $14.95, and is probably available at any store that carries Munchkin. It’s also available at Amazon, for folks like me who will probably stop leaving their homes once drone delivery of everything is a reality³. 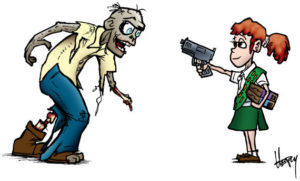 My Zombie Dice review is up at Steve Jackson’s site. It glows like the eyes of an irradiated feral ghoul.

²Ogre: Objective 218‘s game mechanics are based on the game Battle for Hill 218, copyright © 2007 by It’s Your Move Games, Inc. Used under license.

³It’s already begun. I move around so little that my FitBit stopped telling me about goals, and simply withered and died, like an unwatered philodendron.