There was no crossing of the streams, but there has been a crossing of my Threshold of Awesome.

I had a blast at Ghostbusters. There was a little bit of a pacing drag at around the midpoint, and a few of the jokes didn’t fire for me, but in most places the film was kind of perfect.

My biggest concern going into the film was that Leslie Jones’ character was going to be the stereotypically “street smart” character. My worry was based on a snippet of her dialog in the trailer, and I’m pleased to spoil a teency bit of the film by telling you that those lines read quite a bit differently in context.

Of secondary concern was the sound. Specifically, the sound of that lawsuit-worthy walking bass riff, the one that became the audio signature of Ghostbusters back in 1984. Good news! We get plenty of that riff in the film. We also get lots of new stuff, and I find it all much more pleasing to the ear now that I know there’s coexistence rather than replacement.

I had exactly no concern that Paul Feig would give us a fun movie. He and Melissa McCarthy opened a solid line of credit with me last year with Spy, and I’m delighted to announce that the balance has been paid. Whatever their next joint is, I’m in. 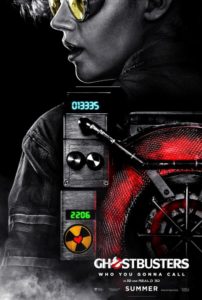 If I’m to quibble about anything, it would have to be the scenes with misplaced focus. Kate McKinnon’s character, Holtzmann, usually was not the focal point of shots where the four Ghostbusters are interacting, but she was by far the most interesting person to watch. It’s as if there’s an entirely different story being told from her point of view.

This isn’t much of a quibble, really. I figured out pretty early on that I didn’t want to miss what Holtzmann was doing in each scene, and I was rewarded for paying attention.

And on the subject of not missing things, the entire credits sequence is entertaining. Don’t leave. Stay in the theater until the lights come up.

I’d love to write a much longer post offering a critical analysis of differences and similarities between the 1984’s Ghostbusters and the 2016 remake/reboot, but regrettably I am made of meat, not time. All I can say at this point is that the craft of cinema has come a long way. The new film is very tightly written¹, and provides lots of wonderful SFX in strong service of the story.

¹For me the 1984 Ghostbusters film plays like a concatenation of good Saturday Night Live sketches. The seams are pretty well polished down, but the sketch-comedy aspect is visible. The 2016 Ghostbusters film feels “through-composed.” When I say that it is “tightly written,” I mean that the story feels like it was structured first to work like a story, and carefully refined in that regard, and then the comedic bits were punched up as appropriate.