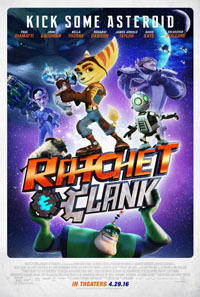 Neither of the adult children (ages 20 and 18) I took to this film had ever actually played the Ratchet & Clank games. Both of them loved the film.

I was pleasantly surprised by it. In particular I was surprised to find myself laughing out loud.

After the third time it happened I began paying attention. I’ve concluded that the team responsible for this film has a really solid understanding of comedic timing. A great many of the jokes were dumb, or were very simple physical humor, but they were so well delivered, and included enough fresh components, that I laughed out loud in spite of having anticipated the punchline.

If you’re a student of humor, I think this film bears scrutiny.

If you’re not a student of humor, and that’s probably most of you, the film is a lot of fun. The voices are spot on, the designs are wonderful, and the animation is quite good. It shows off the finesse we’ve come to expect from Pixar and Dreamworks, but it comes from a studio without that sort of pedigree. (Looking at Ratchet & Clank‘s company credits on IMDB it’s hard to say just which studio handled most of the animation. If it’s CNHK then it’s their debut effort, which is doubly impressive.)

Parents of young children should consider this one. I think little kids will love it, and I almost (read: not at all) wish I had little kids to take to the movies.

Of the movie adaptations of video games I’ve seen, I can’t recall any of them being this enjoyable. Thanks to the great time I had with my big kids, Ratchet and Clank clears my Threshold of Awesome, and enters my list at #4 for the year.