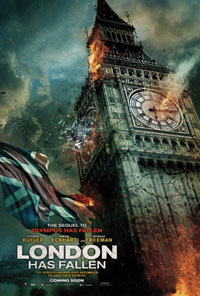 Clearly, Americans have gotten tired of seeing American landmarks blowing up in movies, because this film, the sequel to Olympus Has Fallen, featured London’s landmarks getting blown up in the sort of loving detail that has been standard popcorn-fare for recognizable American architectural stuff since Independence Day (the movie, not the holiday, although there are plenty of explosions then, too.)

It’s been a long time since I was in London. I confess, I didn’t know which buildings I was supposed to be rooting for. There was a bridge that I think may have been important, too, but I didn’t recognize it. I did notice that The Gherkin survived unscathed.

London Has Fallen spent a lot of time creating suspense for the things that we saw happening in the trailer. The build-up was pretty effective, except for the bit where they also tried to get me to care about too many of the characters. Oh, and except for the part where I knew what was coming. From the one trailer I’d seen, I knew that if the person on camera was a) a major world leader, and b) not the U.S. President or Gerard Butler, that person was going to die.

Sadly, the film flinched away from what could have been a really powerful bit of storytelling. There’s this moment where the U.S. President is uncomfortable with a particularly vicious bit of knife-work on the part of his one surviving bodyguard. And to be honest, that bit stepped across a couple of lines. It was brutal, and satisfying, and very wrong.

But we never came back to that moment. The President and his bodyguard never had a discussion about becoming what we behold, or keeping to principles even when it’s inconvenient. This was truly disappointing. I never feared for either character’s life, but the film could have made me seriously worry for their friendship, their sanity, and even their souls. But no. The film flinched.

Sure, I got all the asplodey eye candy I expected, and some genuine suspense regarding secondary, non-world-leader characters, but about an hour in, the movie promised me some soul-searching, which it utterly failed to deliver. Pro-tip: Don’t wreck an okay movie by promising an awesome moment you can’t, or won’t, deliver.

London Has Fallen enters my list at the bottom, and is this year’s first entry below the Threshold of Disappointment.