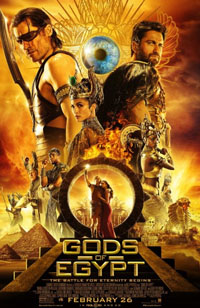 Gods of Egypt is a secondary world fantasy which, for reasons I cannot divine, was branded with Egyptian mythological names. It didn’t need Egypt at all, and probably would have been stronger if it had dropped all pretense of being Egyptian, and simply told a story that stood up to the pretty amazing quality of the effects.

The effects? So pretty. Some of the battle scenes are worthy of blockbuster summer releases, passing the tests of comprehensibility, story, and character arc while being a visual treat.

Ra’s ship, moving the sun across the sky? Stunning in its physics-defying absurdity, right up to the point that this might as well be a flat world scenario… and then lo, it’s a flat world after all (with apologies to Walt Disney and Terry Pratchett.)

The goddess whose bracelet prevents the demons of the netherworld from claiming her? SO COOL when she uses that bracelet for something reckless, stupid, and effective. It would have been even better if this had been her story, and hadn’t been set in Fake Egypt, and hrr—

I was going to add a third item to that “even better if” list, but the list ballooned into a script for a completely different movie so I deleted it.

Gods of Egypt did manage one thing: it cleared my Threshold of Disappointment by virtue of being cool to look at when I was in the mood to simply look at cool stuff. It doesn’t really qualify as a popcorn flick, and fails completely to leverage the mystique of ancient Egypt for anything other than the initial ticket sale. That alone promises to disappoint a large number of people who want more from their movie money than I wanted today.