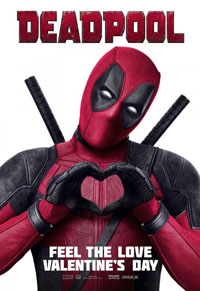 I enjoyed Deadpool, but I don’t have any desire to see it again. I have a deep appreciation for a well-crafted joke, and Deadpool was full of those, but of necessity the jokes were contextualized with stuff I don’t love sitting through.

It’s hard to figure out which side of the cart this horse should be on, and the cart itself is carrying a chicken and an egg. Is it gratuitous violence when commentary upon the gratuitous violence is part of the story? Taken as a whole, the movie works really well, but I only want to take it once. The other Marvel movies have been more inviting, and I’ve seen some of them several times (except the Wolverine origin story, which I saw exactly one more time than I wish I had. So, you know, once.)

Films that demonstrate amazing understanding of the craft are usually a pleasure to watch, and re-watch. Deadpool was truly amazing in a great many ways, but while I had fun in the theater, I didn’t have Threshold-of-Awesome fun. I will, however, concede that the craft on display in Deadpool was top-notch, and was perfect for that particular character.

I’ll slap a ranking on this one after I have seen a couple more movies this year. Kung Fu Panda 3 and Hail Caesar are next on my hit list. I’ll be in touch.