As direct-to-DVD movies go, The Last Witch Hunter is surprisingly oh wait I saw this in the theater. 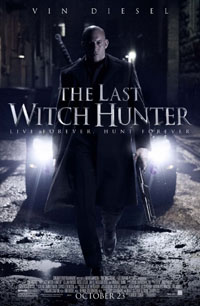 I had fun, but here I am a day later trying to write a review, and the movie has already faded into the meld-haze of urban fantasy “hidden world” films in which a badass protagonist fights ultimate evil. Why did this even get made?

Maybe because Vin Diesel is a giant nerd, and wanted to make a sci-fi/fantasy/horror genre movie that he got to be in?

Look, I had fun during the film. It cleared my Threshold of Disappointment (unlike the OTHER Vin Diesel film I saw this year) and was interesting enough that I did not finish my popcorn or my soda.

But it was predictable, and sloppy, and took shortcuts, and could have been a truly memorable, outstanding addition to a crowded field full of similar things. Here’s a bulleted list of sins which, had they not been committed, could have allowed this film over my Threshold of Awesome.

It’s a long list, I know. A great many genre movies commit these same sins, and are mediocre-to-bad as a result. It’s a good thing I like Vin Diesel, and an even better thing that Rose Leslie (who I’d never seen in a film before) shone the way she did in a cast full of bigger names.

(Note: If there is a sequel that has ZERO Vin Diesel, and is all about Rose Leslie’s character Chloe taking up the Witch Hunter mantle despite being herself a witch, I would pay opening night fancy-seat money. No, wait… just give her a franchise of her own, without the baggage of this film.)

The Last Witch Hunter enters my list at #20 out of #30. Do I recommend it? When it hits Netflix it might make for a great excuse to have the TV on while you knit something. If you’ve got movie money to spend, though, there are many much better options.