Let’s get this out of the way.  The Transporter: Refueled, is 2002’s The Transporter, rebooted. It’s not really a refueling of the franchise, and I can’t help but think “booting” as that thing with the wheel lock that allows parking enforcement to impound a car in place while they wait for a tow-truck. 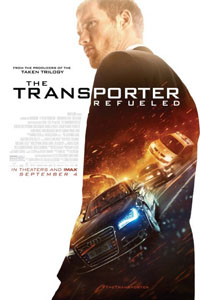 There came a point in the movie when I had the feeling that it had been going on too long, because I was getting kind of bored. I checked my watch. That was the 68-minute mark. This is a good litmus test for a movie that is failing to entertain me.

We have a kitchen-sink arsenal of “stylish action movie” tropes here: mysterious femmes fatales, murderous Eastern European mobsters, career prostitutes who look like supermodels, a grizzled ex-spy, the French Riviera, impossible vehicle physics, and an amoral hero who is very good at everything he does.

In this stylish action movie the filmmakers fuse an underdog heist with the high-concept of  2002’s The Transporter. Our overpaid, overdressed, over-trained automobile courier gets drawn into a scheme that runs contrary to his contractual code, and of which he is merely a player, not a planner.

How well does it work? There were some really cool moments in the film, like the hydrant scene from the trailers which is what got me to plunk down money for tickets. Ultimately it was too linear and predictable for a heist, and there were not enough car scenes for the Transporter franchise. The villains were cardboard cutouts, our female leads were presented in a way that made them unfortunately interchangeable, and the extremely skilled actor who was told to fill Jason Statham’s shoes seemed to be doing everything right with the part, while not actually seeming right FOR the part.

A three-word summation of the film’s failures is “style over substance.” The Transporter: Rebooted falls below my Threshold of Disappointment, entering my 2015 list ranked at #23, a position that suggests it was not as much fun as Minions, but was more enjoyable than the numerical F-twins, Fantastic Four and Furious Seven.

(Note: Several of this year’s films have played directly into the super-spy genre: Spy, The Man from Uncle, Kingsman: the Secret Service, Mission Impossible—Rogue Nation, American Ultra, Hitman: Agent 47, and now The Transporter: Refueled. They’re not interchangeable, but if I wanted to ruin the genre for someone, I’d make them watch all of those during a movie-marathon weekend.)