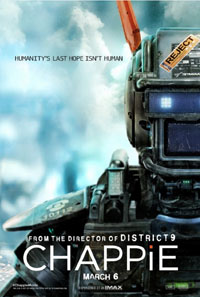 The film takes some of the usual shortcuts where movies with lots of computer jargon is involved, but even without making allowances for that stuff I had a great time.  I don’t know how the effects were done, which meant that early on I stopped looking for the line between the practical effects and the digital effects, and just sat back and believed in the robots.

One of my favorite aspects of the film was the location shooting and the audience’s immersion in South African accents and dialects. Having been to Joberg several times myself, it sounded exactly like I remember it.

Chappie comes in #2 for me so far this year, easily clearing my Threshold of Awesome