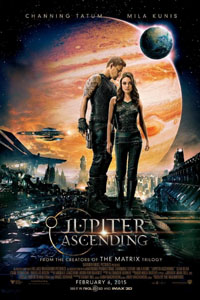 It’s got some Wachowski-sized holes in its world-building, and it feels too long to sit through, but Jupiter Ascending has some of the very best sci-fi action scenes I’ve ever had the pleasure to watch. The running, the flying, the shooting, the fighting… all of it hung together in ways that made sense, and the directors luxuriated in slow motion for some of the best bits. If you want to go to the movies to watch people do cool things with toys we don’t have, Jupiter Ascending is a good choice.

But the plot holes? Ugh. Look, if you decide to see it, I recommend the brain-armor: anytime a non-Earthling says “DNA,” pretend they’re saying “magical soulprint,” because whatever they’re talking about has as much in common with actual DNA as pixie dust or midichlorians.

To my even-more-critical eye, the film looks like it suffered from a re-shoot, late story edits, and then a throwing up of the hands by the director, who then went on to say “there’s no more money and no more time, and the producer is done chasing sunk costs, so we’re releasing in February.”

Have I made it sound like I hated it? No. I loved the baroque BDO visuals, the ship designs, and most especially those action scenes, which bought the rest of the movie for me. I just hope that whoever is out there in Hollywood writing a really GOOD space opera can hit the same level of visual awesome that Jupiter Ascending did.