I love the penguins in the Madagascar films, but they’re best taken in small doses with no character arcs. This film was fun, but it wasn’t awesome. 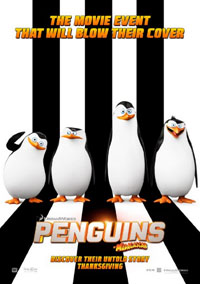 If you’ve seen the third Madagascar film, the one with the circus, the opening chase scene is over-the-top hilarious. Delightful. Penguins of Madagascar gives us a gondola chase that is similarly over-the-top, but it didn’t quite clear the bar set by the Paris chase in the previous film.

Part of the problem with this film is that in all of the others the penguins are a force of nature. They are super-beings whose successes are godlike, and whose failures mean a thing simply cannot be done. In this film, however, the penguins are our protagonists, so they’re not allowed to be super-beings. They come close, sure, but their failures feel contrived, and their successes can’t ever be quite as awesome as they were in the previous films.

I had fun, though. Penguins of Madagascar comes in at #14 for me for the year.