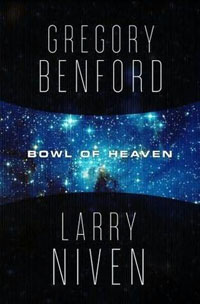 Last year I read Bowl of Heaven by Benford and Niven, and really enjoyed it. The book had lots going for it, and my biggest complaint was that it ended pretty much in the middle of the story. Sure, local threads got wrapped up, but the overarching crisis had not been resolved. 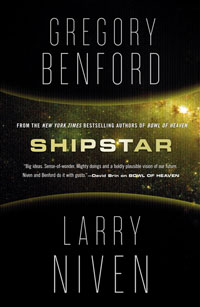 This is science fiction like the kind I grew up loving, in which the scale of engineering evokes sense of wonder, and the setting is a critical player in the story being told. The second volume adds of detail the setting and depth to the characters, and of course it finishes the story much more satisfactorily.

Thanks to Writing Excuses I’m pretty interested in the process of creating the things that I like, and I was delighted to find afterwords by both authors. These essays by Benford and Niven were fascinating, not only for what they said (lots of cool things about designing BDOs, B-“Smart”-Os, and eon-spanning civilizations), but for what they didn’t say. In particular, they made no mention to specifics in designing characters. I’m sure that’s something that the authors did, but for some reason that’s not what they thought would interest us in the essays.

I wish they had, because the alien characters were interesting and distinct, and the human characters got a lot deeper with the second volume. I’d love to know what went into making that happen.

At the end of Bowl of Heaven I was pretty sure I knew what Shipstar‘s big reveal was going to be. I got the reveal right, but it wasn’t the big one. I’m quite happy to have been mostly wrong. Shipstar had a bunch of new things in it (something to shop for in a new book, obviously,) and I found the reveals very satisfactory, right down to the surprising-yet-inevitable bits.