Into the Storm had a lot of tornadoes in it, but no sharks.  ZERO. Nary a one. 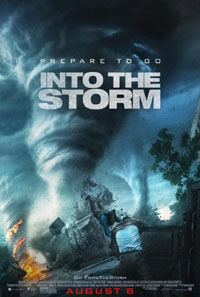 One of the tornadoes caught fire, and that kind of made up for it. Another one was full of tractor trailers, and several tornadoes filled up on barn components. I could be wrong, but I get the feeling that if you can name a common thing (but not a shark) this movie put that thing into a tornado.

Surprisingly, at least two of the tornadoes had Thorin Oakenshield in them, though he was in his six-two, beardless Richard Armitage form. No axe. Pocketknife.

Enough silliness. This movie was far more enjoyable than it had any real reason to be. The “found footage” conceit worked against it, at least to my tastes, but even when they were talking directly to the cameras for posterity, every character on screen was more interesting, more engaging, and more believable than the Megan Fox incarnation of April O’Neil. And I include the four characters who died in the first scene.

In 1996’s Twister our excuse for seeing lots of funnel clouds was that we were following storm chasers, and they were chasing storms pretty effectively. Into the Storm took a different approach, the “what do you mean there’s ANOTHER cell coming?” approach.

Remember that scene in Twister where Bill Paxton and Helen Hunt get to look up into the eye of the tornado? Into the Storm one-ups that moment in a beautiful way.

That said, Into the Storm is very much middle-of the-pack fare. It feels like a high-budget, made-for-TV movie, and I don’t think you have any reason to see it in theaters if Guardians of the Galaxy is still playing, and you still have movie money, and friends who have not yet seen Guardians of the Galaxy.  As of this writing, Into the Storm comes in at #15 for me for the year.