Two of this this weekend’s new releases are based on popular mythology. One of them takes its chosen myth completely seriously, doubling down on it all the way to the end, and never leaving anybody convinced. The other one throws stones at its myth for pretty much the whole movie, but at the end you really want to believe. 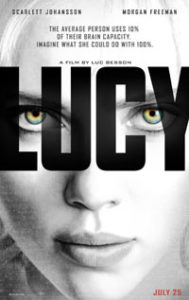 I saw Lucy last night with Sandra. I had hoped that the “you only use 10% of your brain” myth bandied about in the trailer might be something they refuted in the film, but if they didn’t I figured I could just treat it as a superhero origin story starring Scarlett Johansson. Unfortunately that is not how it went down. Morgan Freeman lectured for several agonizing minutes on the subject, and even though his lecture was interspersed with some cool imagery and tense plot-advancement, the effect was that Morgan Freeman was talking during a movie I wanted to watch.

Who doesn’t love listening to Morgan Freeman talk? His voice is delightful. Which is why any movie that makes me want Morgan Freeman to JUST PLEASE STOP TALKING has gone tragically astray.

Public Service Announcement: We use our whole brains. Getting smarter is not the process of unlocking unused brain cells. It’s the process of activating unused hours of your day, with studying, problem-solving, socializing, and hundreds of other varieties of focused thinking. And understanding this simple principle is the first key to actually getting smarter. If you believe you can strengthen your brain, you are more likely to stretch yourself and actually do it.

I could have rewritten the central conceit of the film pretty easily. Luc Besson was already committed to very hand-wavey science, so I’d just invoke a little bit of brain chemistry terminology, and posit a drug that accelerates certain chemical reactions. Sure, real neuroscientists would cringe, but this film is already lost to them. I could have saved it for the rest of us.

There were other problems, though. All the murderous villains were Korean*, which gave the film a seriously racist ring. Yes, ethnic gangs exist, but they can be portrayed better than this. Also, our heroine was very morally ambiguous, but the film failed to properly explore that. The one guy who called her on it didn’t try hard enough. Missed opportunity, at best.

Hang on, though: I had fun! The action sequences were great, the tension during our inciting incident was delicious, and throughout the film we were treated to genuine on-location filming and a broad diversity of background players (even if pretty much all the evil ones were Asian.) It wasn’t the same old places and faces we’re used to getting from Hollywood, and I loved that.

But doubling down on a disproven, debunked, and potentially damaging myth? Really annoying. I guess the movie was a little bit like being at a fun family picnic while there’s a nail in your foot. “This potato salad is delicious, and it’s wonderful to see all of you, but there is a nail in my foot.” Lucy failed to clear the Threshold of Awesome. I’m putting it just below Transcendence, because that one did the future of human evolution much more convincingly.

I went to this show just to clear my palate of Lucy. A dumb, fantasy-mythological action flick seemed like just the thing. 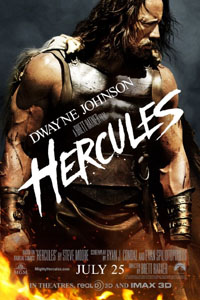 You know what? This may be my favorite cinematic treatment of Hercules ever. I was surprised. I had one moment of action-movie fatigue during the first big battle scene, but then the story of the battle advanced a bit, and I got back into it. The battle was not a montage of crunching. It had tactics. Some good, some astoundingly bad, some competently depicted, some utterly ridiculous, but there was a STORY in that fight. And in the other fights. In almost all the fights, now that I think about it.

Hey, Hollywood! Put more stories inside of fight scenes! I can totally take it.

You know all those “Labors” scenes from the trailers (the lion, the boar, the hydra, etc), the ones that look totally over-the-top fantastical? Yeah, they were done in the first three minutes, at which point our first reveal was that Hercules is, at least to every measurable outward appearance, a man. Oh, and he has some really cool friends with whom he adventures. At that point (five minutes in) I felt like this movie maybe had a story to tell that I could get into.

Yes, the Amazon archer’s “armor” was one of those ridiculous bare midriff outfits, and the film had plenty of other problems, but I still had a great time.

This Hercules film is loosely based, with no small contractual dispute, on the comics created by the late Steve Moore. The saga in which comic book creators lose any rights to  their creations, and somebody else gets rich, plays out yet again. As a comic book creator it frustrates me. It might frustrate you enough to stay home, and I won’t blame you for this. But if you do go, I think you might enjoy the movie. Hercules clears my Threshold of Awesome.

(*Note: Regarding the race of the villianous mob in Lucy, Choi Min-sik, the leader, is Korean, and I’m told that the language they were all speaking was Korean, but the only English identifications of foreign language in those scenes led me to believe they were Chinese. I don’t know for sure.)