I’m a week late with this one. Sorry! The Schlock Mercenary colorist, Travis Walton, is heading to San Diego Comic Con, and I needed to restore the buffer a bit so he could color far enough ahead to get a vacation. Yes, the depth of my buffer dictates the maximum depth of HIS buffer. This is what tyranny looks like… 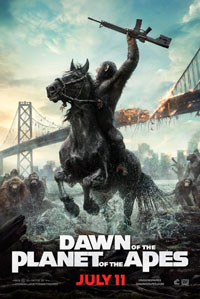 I loved this film. It had a big hurdle to clear, because I’m familiar with the television series, and if that is canon in this setting, the humans eventually lose and they all become slaves. That meant that I sat down expecting a war in which the humans lose, laying groundwork for the setting us old-timers are familiar with.

I don’t mean to suggest that this is where the film makers have to go. They can do their own thing. Maybe they’re planning to eventually create a serial called “Planet of the Apes, Moon of the Humans” or some such. Or maybe they’re going to do a crossover with H.G. Wells’ “The Time Machine,” and the apes all evolve into hairless, toga-clad wimps while the humans retreat underground and become morlochs. Seriously, they can do what they want. But I brought baggage to this movie, and they knew it, and folks, they were totally ready for me. Saw me coming, even.

See, the movie isn’t about what will eventually happen. The movie is about what’s happening right now, with these people (and by “people” I mean “sapient Hominidae,” not just humans), and they sold that in the very first scenes.

The opening credits establish that the human world has fallen apart, thanks to a super-flu that makes Ebola look like hay fever (the survival rate quoted in the movie might be a bone of contention for students of virology, but I handwaved that.) Meanwhile, the apes, sapient thanks to the same virus, are thriving.

A small town’s worth of human survivors have holed up in an improvised fortress in the ruins of San Francisco. These people have lost family, friends, and their entire way of life, but they’re alive and they’ve found a way to maybe get a leg up on rebuilding. And then they run into the apes, who are currently inventing their own way of life, and don’t want the humans to mess with it. That’s the first ten minutes…

This is a story about good people (“people,” see above) striving to overcome the evils of their time, the evils among their kind, and even the evil within themselves. It is, and I say this unequivocally, a really good story.

It’s also beautiful. The forest is lush, the ruins are breathtaking, and the special effects are seamless. Do you remember the tagline for the original Christopher Reeve “Superman” film? YOU WILL BELIEVE A MAN CAN FLY. And back in the 80’s we totally did.

Well, it’s 2014. YOU WILL BELIEVE A CHIMPANZEE IS DUAL-WIELDING FULLY AUTOMATIC ASSAULT CARBINES WHILE RIDING A HORSE doesn’t scan quite as well, but that’s exactly how I felt about this film. I couldn’t tell where the ape-suits ended and the CGI layers atop motion-capture began. Were those real horses? I don’t know! But I believe those were chimpanzees riding them!

This movie fulfilled my desire for eye-candy, sated my lust for sci-fi action, delivered an entire barrel of monkeys*, and told a great story. It underutilized Keri Russell, but partially atoned for that by letting Gary Oldman and Andy Serkis chew on the scenery. It clears my Threshold of Awesome and comes in just behind Godzilla for me this year.

(*Note: No monkeys. APES. But monkey is a funny word, and they come in barrels.)