Henry Cavill’s “Superman” is not nearly as entertaining a hero as is his “Napoleon Solo” in The Man From U.N.C.L.E. 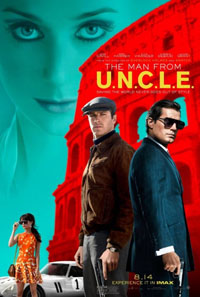 My oldest daughter and I took in the movie Friday night, and The Man From U.N.C.L.E. subsequently leaped onto my 2015 rankings and took spot #3. It could have taken the #2 slot from Avengers: Age of Ultron if its third act had treated us to more of the awesome banter from the first two acts, but the misstep was a small one, easily forgiven.

Two standout items from The Man From U.N.C.L.E.: outstanding visual storytelling during the action sequences, and brilliantly twisty dialog during the talky bits. As added bonuses, Henry Cavill redeemed himself from that Superman role I was so disappointed in, and Armie Hammer redeemed himself from that Lone Ranger role that I’m still trying to forget.

Does there need to be a sequel? No, but I left the theater happy in the knowledge that there could be, if only in the imaginations of the folks who see the film.